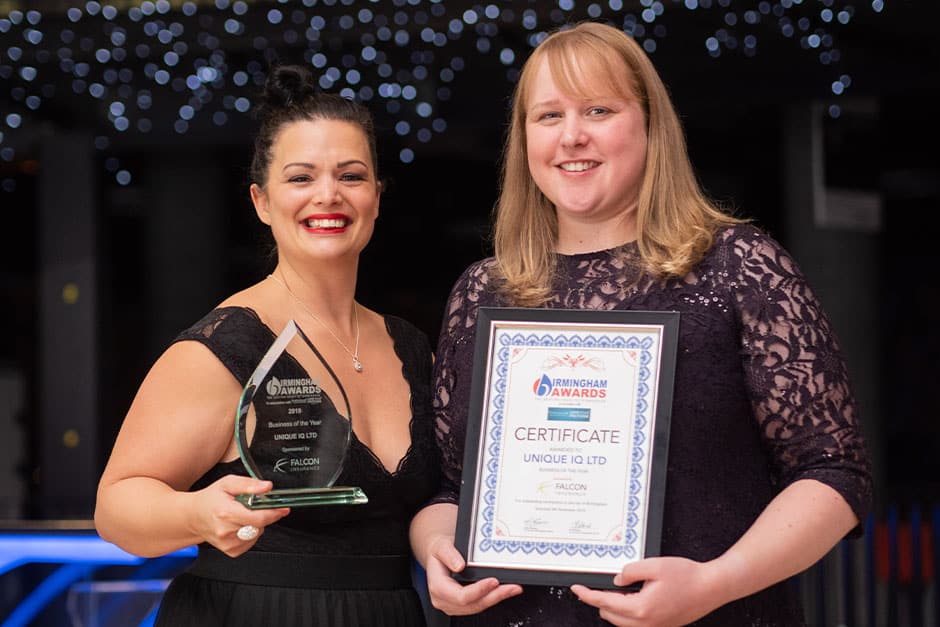 The team at Unique IQ is thrilled to announce it has won ‘Business of the Year’ at the Birmingham Awards.

At a glittering ceremony in the Library of Birmingham, the Redditch-based software company took home the coveted trophy, having been selected from a shortlist of 7 local businesses, following a public vote and panel interview.

Unique IQ was praised for its innovation and technology, which is helping to change the face of the care industry. The judges also highlighted Unique IQ’s rapid growth from small company to nationwide innovator, and for taking the time to train apprentices and share knowledge. The technology company was described as a “real asset to the city of Birmingham”.

Managing Director and founder of Unique IQ, David Lynes, said of the award: “it’s a real honour to have been named as business of the year. It’s fantastic to be recognised for our contribution to the home care industry, as we work hard to improve the working lives of domiciliary carers through our software, as well as helping them to deliver better care to those who need it.

“It’s also recognition for the whole team, particularly those who work tirelessly behind the scenes to continuously improve both our software and service to customers. I’m very grateful for all of the effort and hard work that the fantastic team at Unique IQ put in, as well as to our supporters who voted for us, and who have been with us as we’ve grown”.

Now in their fifth year, the Birmingham Awards recognise the individuals and organisations that have made an outstanding contribution to the city of Birmingham, with founders Ifraz Ahmed and Anita Chumber keen to find the hidden gems.

Find out more about Unique IQ.