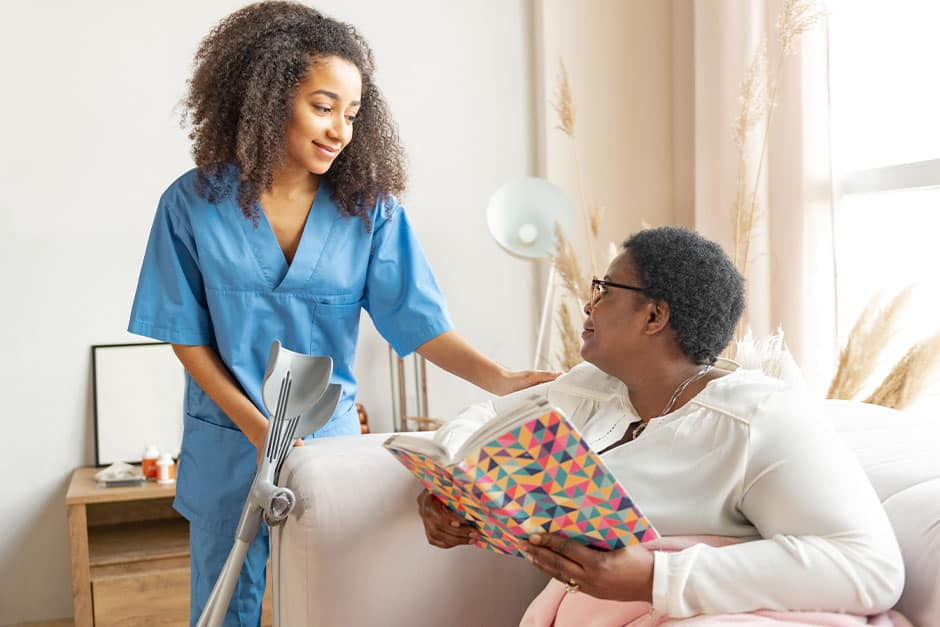 Technology is an important area of focus in Care Quality Commission (CQC) inspections. Here is some of the feedback about Unique IQ’s home care software that has been featured in a number of CQC inspection reports.

“CAREGivers always contacted the agency office on arrival and again at the end of their visit before leaving a person. They used a Freephone system (known as an ‘IQ timecard‘) which linked them to the agency computer system. If they were more than 15 minutes late, the agency office would be alerted through their computer system and they would immediately contact the person and the CAREGiver to find out the reason for the delay and to let the person know what was happening. If for any reason the CAREGiver was unable to visit as arranged they would make sure another member of their team visited the person instead. This meant the agency office was able to monitor all visits closely to ensure people received a punctual service, and to check that CAREGivers stayed for the correct length of visit. It also meant that people never experienced a missed visit.” (June 2017)
View report (Home Instead, South Devon)

Home Instead, Eastbourne and Hailsham – OUTSTANDING

“The service used a Freephone telephone system (known as “IQ” timecard). On arrival to people’s home staff contacted the office using this system. If staff were over 15 minutes late, this triggered the office to call and check staff and people were safe. This system allowed the providers to check people had received their visit as planned and on time. People we spoke with and who provided feedback all commented on the reliability and punctuality of staff.” (December 2017)
View report (Home Instead, Eastbourne & Hailsham)

“New technology was being introduced in the form of IQ timecards. This system sends an alert to the office if a caregiver was 15 minutes late. This system would ensure the CAREGiver remained safe and the person was alerted if the CAREGiver was going to be late.” (November 2016)
View report (Home Instead, Epsom & Mole Valley)

“Caregivers logged in and out of their calls using a telephone system. If caregivers were more than 15 minutes late, this created an alert which was followed up by a member of the management team to investigate and resolve.” (June 2019)
View report (Unique Senior Care, Coventry)

90% of home care organisations using Unique IQ’s software are rated ‘Good’ or ‘Outstanding’ by the Care Quality Commission. Why not download a copy of our guide – ‘Outstanding Home Care’.

“The use of information technology enabled people to receive a responsive service and provided CAREGivers and office staff with easy access to the information they required. The agency’s call monitoring system ensured that visits to people were monitored. If CAREGivers were running behind schedule, the agency’s “IQ timecard” system alerted the management team with text messaging and emails being sent to them, informing them that a CAREGiver may not have logged in or out of a person’s home. This would prompt the registered manager to contact the person and the caregiver to ensure that all was well. This provided a safe lone working process for caregivers.

“The ‘IQ timecard’ system was also in place ensuring staff arrived safely at people’s houses and people were made aware quickly if staff were running late. This provided assurance to people with office staff proactively contacting people to inform them if caregivers were running late. A person said, ‘They have been late only once over the past year, and even then, they let me know.'” (November 2017)
View report (Home Instead, Chichester & Bognor Regis)

“One care worker said management were very good at ensuring staff used technology correctly to log calls and would “call staff in” to follow-up if they had not. One care worker said they understood this practice helped to safeguard clients and staff and was proud of their 99% call log record and had received a lot of praise from management about it.” (November 2018)
View report (Westminster Homecare, Buckinghamshire)

“The provider had also implemented electronic systems which provided staff with ‘real time’ information about people’s needs and prescribed medicines. The system enables office staff to receive immediate alerts about any missed medicines or concerns about a person’s well-being thus allowing them to take prompt action as necessary.” (December 2019)
View report (Home Instead, Telford)

“One relative advised, ‘There is a very good security system in place with telephoning in and out at the start and finish of each call’. Quality assurance processes were in place to drive improvements throughout the service. For example, the provider had call monitoring systems in place to identify any late calls so they could take immediate action to investigate the reasons and inform people.” (November 2019)
View report (Home Instead, York)

“There were robust auditing systems to review service delivery, maintain their quality service and identify areas of improvement and build on successes. For example, monitoring that staff visit clients on time had shown the registered provider had achieved a 98.2% success rate within the agreed visit timescales.” (November 2018)
View report (Home Instead, West Lancashire & Chorley)

“The provider had an automated logging in system for CAREGivers. When arriving and leaving a person’s home they called a free-phone number and this logged the time of the call in the office. This information was displayed on a large screen in the office and could be seen by staff at any time. An alert was also sent to the scheduler’s mobile and email system, so that action could be taken if a CAREGiver was going to be more than 10 minutes late.” (November 2018)
View report (Home Instead, Richmond)

“The service used a telephone call monitoring system to track when staff arrived and departed from people’s homes. This had been introduced eight months prior to the inspection and was working well, with positive feedback from staff and people who used the service. Staff told us, ‘It works much better than the old system, when you spent much longer writing arrival and departures down, and it meant you could forget. You can’t do that now.'” (March 2018)
View report (Home Instead, Newcastle-upon-Tyne)

“The managing director explained that the agency’s monitoring systems would alert the office team if a care worker had not arrived on time at a scheduled visit. Care workers were required to log in when they arrived at a visit and to log out on departure. If a care worker had not logged in within seven minutes of the scheduled start of a call, they received a reminder to do so via text message. If a care worker had not logged in within 15 minutes of the scheduled call time, the office received an alert to advise them of this. Office staff were then able to contact the care worker to establish their whereabouts and to contact the person receiving care if necessary.” (December 2017)
View report (Home Instead, Guildford & Woking)

“There was an effective call monitoring system which triggered an alert to senior staff if staff had not logged in or out of each visit within a certain time period. This helped ensure staff were safe and calls had not been missed.” (November 2018)
View report (Precious Passionate Care)

“We looked at what technology was used to support people who used the service. The service had an ‘IQ’ system in place for staff to use to log in and out of people’s homes. This allowed staff a 10 minute window in case they were running late; after that an alert was sent to the office to inform them staff had not arrived. The care co-ordinator told us if this occurred they would ring the staff member to locate them and keep the person using the service informed.” (November 2018)
View report (Home Instead, East Lancashire)

“Information technology was used and was in the process of being developed to support the organisation. An “IQ timecard” system meant staff logged in on arrival at people’s houses and people were made aware quickly if staff were running late. A new “real time” medication system was due to be introduced early in the New Year. This would allow close monitoring of people’s medicines to ensure they were managed safely.” (December 2018)
View report (Home Instead, Lewes District & Uckfield)

“The service used a Freephone telephone system (known as “IQ” timecard). On arrival to people’s home staff contacted the office using this system. If staff had not completed their timecard this triggered the office to call and check staff and people were safe. This system allowed the owner to check people had received their visit as planned and on time.” (March 2018)
View report (Home Instead, Bexhill-on-Sea)

“We saw another system called ‘IQ Timecard’ alerted staff members to any amendments to their calls and sent them their rota each week. The IT system also flagged if a service review was due, if a staff member was more than 15 minutes late for a call, birthdays and if there had been any contact from the person or their relatives.” (January 2018)
View report (Home Instead, Darlington)

“CAREGivers had an IQ time card and were required to log in to the system when they arrived at the person’s home to provide care. This enabled management to monitor that CAREGivers had arrived and were with people at the identified time. We asked people and their relatives if there had been missed visits and whether CAREGivers were with them at the required time.” (July 2017)
View report (Home Instead, Wigan)

In its 2021 report, which was part of a pilot programme by the CQC exploring the feasibility of virtual inspections, the inspection once again referenced the use of IQ:timecard.

“The provider had an electronic call monitoring system where staff logged in and out of calls. If the call is not logged into within an allocated time, the person using the service and/or staff are contacted to ensure they are safe and well.”
View report (Home Instead, Wigan)

Want to know more about technology and the CQC? Read our guide here.